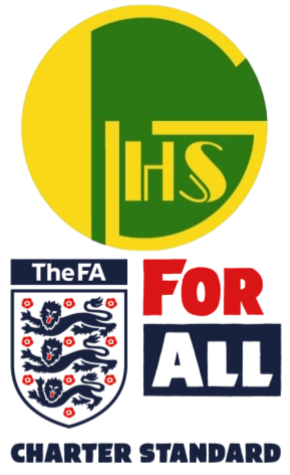 We are a popular club based in Bristol, set up and run predominantly by volunteers and parents. We provide football coaching and games for children aged 6-18 with an emphasis on fun and participation.If you are a parent/carer for one of our players, please above for the club ethos, operating policies and other documents.We are part of the wider Golden Hill Sports Association that includes the YMCA Cricket Club.

If you are contacting the club about availability, please email the address for the age group you are interested in: e.g your child is in Year 3 = email under8s@goldenhillsonics.co.ukWhile we often have girls join Sonics, we do not have dedicated girls' teams. We are open to supporting an enthusiastic parent who wants to start up a girls' team/section at the club- please email chairman@goldenhillsonics.co.uk to discuss :)

The Child Welfare Officer (CWO) at Golden Hill is Daniel Beasley-Suffolk. He can be contacted by email at cwo@goldenhillsonics.co.ukWe are backing the FA Play Safe campaign- click here to find out more.

THE SONICS FAMILY ARE HERE TO HAVE FUN AND PLAY FOOTBALL!

We also want to keep you safe and make sure you know there is help out there if you need it. You are a person as well as a player and the coaches have a duty of care to respect that. Your coaches’ role, as well as teaching you the ins and outs of football, includes:- being a good role model – leading by example at all times
- not speaking to you in a way that makes you feel uncomfortable
- not bullying you to make you do things
- treating you as an individual
thinking about you and your team mates and not just about winning or scoring goals
- making sure the pitch/playing area and equipment are safe for you to use
- having the right qualifications to coach youAll the adults involved with Sonics (coaches, referees, parents) should be role models for children and if they can remember this each week, then the game will be far more enjoyable for everyone!

HOW TO ASK FOR HELP AND GET ADVICEThere are lots of people you can talk to if you are worried about how someone is behaving towards you whilst you are at Sonics.You could talk to your parents, or your coach, the club chairman or your welfare officer. Remember, you have joined Sonics to play football, make new friends and most importantly – have fun!If you are a young boy or girl and you are upset, hurt or scared with the way somebody behaves with you, please let someone you trust know now.Brian Henniker is the club welfare officer and is always available to contact if you are worried or have any concerns or questions. You can email him at cwo@goldenhillsonics.co.uk or call him on 07971 524 609.If you would rather, there are lots of websites out there to help you out and offer advice. Try going to one of the following – just click on the link to find out what they do and how to get in touch:You may prefer to use one of the websites that offer advice. Some you can email your concern to and they will email you back with advice specifically for you. It’s easy to get information simply click on the web address and find out more.

The FA provides lots of help and support to ensure the safety of children and young people playing football, and works closely with the NSPCC to provide 24 hour access to help and support.Visit the FA Safeguarding website for the latest information or get in touch via the NSPCC 24-hour helpline on 0808 800 5000.Other useful places to go for information and support include:Bullying Onlinewww.bullying.co.ukChildLinewww.childline.org.uk or telephone – 08001111CEOPhttps://www.ceop.police.uk/ceop-reporting/Kidscapewww.kidscape.org.ukNSPCCwww.There4me.com and www.worriedneed2talk.org.uk (aimed at 12 – 16 year olds)Stop it now!www.stopitnow.org.uk or telephone – 0808 1000 900

From our chairman"At Golden Hill Sonics Football Club we believe that we have a unique set up, as some Clubs may measure their success in terms of the number of cups and trophies they win but we consider our success to be measured by the pleasure and opportunity given to local youngsters and them having the chance to participate in regular organised football activities at an affordable cost. This isn't to say we don't strive to achieve honours each season, but we don't want to sacrifice participation in the search for glory."

Golden Hill Sonics is a popular youth football club set up and run predominately by parents . The club provides football coaching and games for chilldren aged 6 to 18 with an emphasis on fun and participation . We have been very successful recently in terms of numbers of children enjoying their football , increased parental involvement in the running of the club and growing links with Golden Hill Sports as a whole.Our aim is to have fun. We want all the children to enjoy their football in a supportive positive environment. We hope that the children will gain in confidence, feel part of a team and benefit from both the physical and social rewards of sport.Parents/guardians must ensure the following:+ Children arrive with boots and shin pads
+ Children have suitable clothing and refreshments
+ Parents/carers of children in the younger year groups are expected to stay on site while their children are involved in the training sessions and matches.
+ Club membership fees are £70 for a season. These fees cover pitch rental, facilities, fully qualified coaches, grounds maintenance, insurance, equipment, plus your child will receive a full Sonics kit.
+ The maximum squad size will be 20 children with a waiting list created once this number has been reached.Please read our coaching ethos herePlease read our club operating mandate here

CLUB POLICIESEvery person who is involved with Golden Hill Sonics Football Club, whether as a player, coach, official or parent/carer, has a responsibility to act according to the highest standards of integrity, and to ensure that the high reputation of the club is maintained.Our values as club members are:1. Commitment to improvement – as individuals and as a team2. Respect for each other3. Team work and team play4. Playing by the laws and spirit of the game5. Enjoying our football and each other’s friendshipBreaches of ConductIf an individual wishes to report a breach of conduct, they should approach the relevant team coach. Where this is not appropriate, they should approach a member of the Committee. If a breach of conduct cannot be resolved in an informal manner, the Committee can be asked to formally consider the matter. The Committee will then take whatever action they deem to be necessary.The Child Welfare Officer (CWO) at Golden Hill is Dan Beasley-Suffolk who can be contacted by email cwo@goldenhillsonics.co.ukAs a Club we adhere to and implement the FA Respect Codes of Conduct. Please ensure that you have read the following: 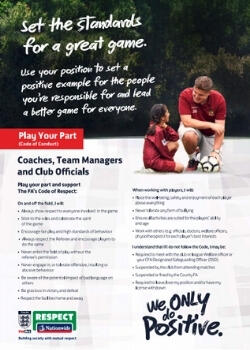 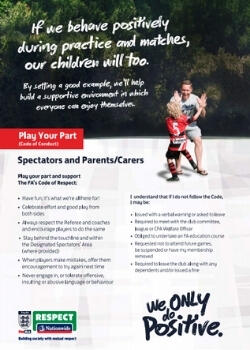 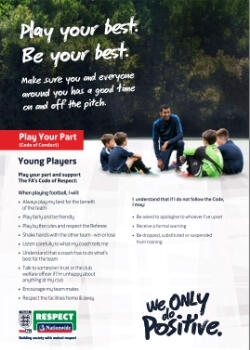 GET IN TOUCH & WHERE TO FIND US

Please note that dogs must be kept on leads at all times and in all areas of the ground.

If you are getting in touch about joining a particular age group, please CLICK HERE to find the email address for that age group.For any general queries, please contact web-AT-goldenhillsonics.co.uk (Please do not use this address for joining/availability enquiries, those should go to age groups direct)

When your son or daughter joins Golden Hill Sonics we will treat them the same as everyone else, regardless of their ability. We want them to enjoy their experience at Sonics in a safe environment.We are a FA Charter Standard Club and are committed to having at least one FA qualified coach per year group. We aim to develop all the children as footballers by allowing them lots of time with a ball at their feet and using small sided games in training.We will allow them to experience playing in different positions and aim to ensure all the children haveequal playing time in matches. We encourage the children to bond as a team off the pitch as well as on it – we have children from lots of local schools so they make friends from different schools.On the pitch we encourage ‘playing out from the back’ and always praise effort as well as achievement Most year groups don’t enter leagues until under 11’s, instead playing friendlies against other local clubs.When playing in competitive leagues we are committed to strong principles of fair play and respect. If your child joins us we very much hope they will keep playing right through to under 17’s and develop a love for the game.

Joining SonicsWe are an inclusive & non-selective club. Most players join us as Under7s in Year 2 with sign-ups opening in the January of that year.We have a squad size of 20 in any year group and after that we operate waiting lists in the event of spaces becoming available.To enquire about spaces or to ask to be put on a waiting list for a particular age-group, please email the relevant team. All team email addresses are in the OUR TEAMS section.While we often have girls join Sonics, we do not have dedicated girls' teams. We are open to supporting an enthusiastic parent who wants to start up a girls team/section at the club- please email chairman@goldenhillsonics.co.uk to discuss :)

Golden Hill Sonics is lending its full support to Play Safe – a national FA-led campaign to raise awareness of the importance of safeguarding in football.Play Safe is being run in partnership with the NSPCC and has the full backing of the Premier League, EFL, Barclays FA Women’s Super League and the FA Women’s Championship. It’s also supported and being run across every other level of the game.The main element of Play Safe is a series of short films which emphasise the importance of clubs such as ours having safeguarding as an everyday reality. The films also explain to parents/carers and children themselves know what to do if they feel unsafe or worried, because nothing matters more than making sure football is safe for everyone, especially children and young people. You can see these films below.

“As a youth team coach, I will be working with my club to ensure we support the Play Safe messaging,” says FA Chief Executive Mark Bullingham. “I am also pleased that the campaign has the support of the former footballers with lived experience of abuse in football, who are on our Survivor Support and Safeguarding Advisory Group. The Group has collectively said:“Learning from the past is crucial, so that we can prevent the horrific experiences that happened to us and so many others in football, from happening again.“As a group of survivors, we fully support the ethos and important messages that Play Safe conveys – whether to club officials, parents/carers and or vitally, children and young people themselves. Equally important is that Play Safe is not a one-off campaign – it will be used at key points in the football calendar to remind everyone in football, that children’s welfare and keeping them safe, should be at the heart of all that we do.”As the Survivor Group points out, you’ll see Play Safe appearing at various points throughout the season to keep safeguarding front of mind in football. Together, we want to do everything we can so everyone – particularly children and young people – has a consistently positive experience of our great game.